Considering the value of any investment in construction, it might sound scary when an architect says that practice makes perfect, but that’s the way it is. This time, however, I’m not talking about learning from mistakes, but about how a finished building can teach its author really good lessons about architecture and help them grasp and articulate their own approach to designing.

My latest encounter with that was with the new house in Sokolgradska Street. Finishing works are going on in the interior, but the house has just been finished on the outside and so it “landed” into its own form and into the urban surroundings. As soon as it landed, it told me something important - something that’s been bugging me for years: something about the difference between style and character.

The thing is, I was never happy with this preoccupation with architectural styles, whether it meant seeking the beautiful or seeking the ugly. Nostalgia for past styles or frantic search for the contemporary, the need to belong to a style or the need to avoid them... All of it seemed to be missing the point and serve nothing.

The same goes for searching for one's own style, something never seen before, something unmistakeably recognisable. If someone wants to do it, why not. But I never had the feeling I would benefit anyone with such a thing. Neither myself nor my clients and the society.

However, shaping a building with attention and thereby creating and expressing something seemed important enough. And the thing I have been striving to create is, in a single word, character.

I like a building that has character, personality. Almost like a person who is being him- or herself, unavoidably special and unique even if they are unnoticeable or keeping a low profile. Or maybe the opposite - extroverted and extravagant - but not because of style or fashion. It's because of the character that goes deeper, to a point that combines the investor's personality and motives with the peculiarities of the house's location and other ingredients of its DNA. It's not fashion or style or facade; it's character.

Look at the photo of the house in Sokolgradska. Tell me if it says something to you, and what. I'd like to know what unprejudiced eyes can hear. 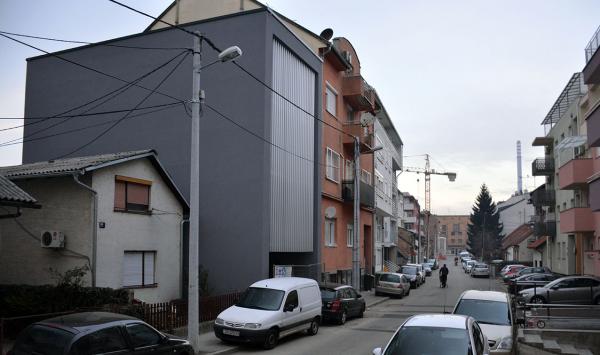 To me, the house speaks about how, in a chaotic neighbourhood called Trešnjevka, in a street that is too narrow and too developed, it carefully protects its own inside, both by framing it and by putting a semi-permeable bris-soleil membrane in front of its windows. It dares to show it's different (paradoxically, it is the chaos of the surroundings that allows it to), without actually revealing what's inside it (two duplexes). In front of the entrance, there is the ground-floor parking niche, mysterious and dark enough to seem uninviting and private.

Actually, the house brings to my mind an older brother or sister, who takes care of the younger siblings. He or she knows the neighbourhood better and is there to protect them, even to stand up to those who may come too close, but mostly it stands by anonimously, letting the youngsters (in this case the dwellers) live their lives, their relationships, their joys and their battles. And then, when the kids come home and need someone to confide to, the older sibling is there to hear them out, in their "secret" hiding place, somewhere in a room or in the garden, far away from gazes and noises.

People come and go. They move to different places and dimensions. Houses often live on longer in a single place. Those that have character will always be able to say who they are, how and why they came to be and what they serve best. They'll be able to inspire, protect and direct those new dwellers that will have understood their language. Such a house will be able to give its dwellers a manual for using it in a way that isn't just functional, but has something to do with quality of life, quality of relationships and everyday happiness. In other words, it will give them what it gave the architect: a chance to have a constructive conversation with themselves.

This year at D Day we exhibited the Ab Ovo coffee table and three spheres that settled into it.

Our LED Tree concept was exhibited at the Gwangju Design Biennale

Having been shortlisted at an international competition, the LED willow-tree concept, whose branches are lit as intensely as the wind sways them, was exhibited at the Gwangju Design Biennale in...